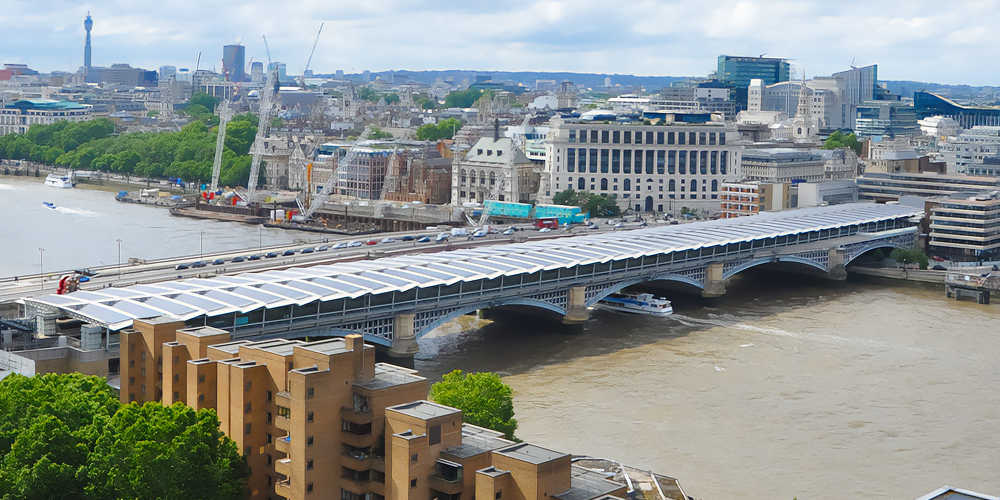 The Blackfriars bridge is the largest solar powered bridge in the world!

The project was one of the most complex to date for Solarcentury, which installed the panels in a series of phases over the past two years. It is larger than the world’s first solar bridge, the Kurilpa Bridge located in Brisbane, Australia.

The roof of the bridge has been covered with 4,400 photovoltaic panels equating to an area almost as large as Wembley stadium or 23 tennis courts, which provides up to half of the energy for London Blackfriars station.

The roof above the Victorian bridge was part of a £6.5bn programme to increase the capacity of the Thameslink route. As well as reducing the carbon dioxide emissions from the station.

The improvements that have been made on the Blackfriars bridge are not only to improve the journey for commuters but also provides London & the UK with a sustainable station for many years to come through the installation of solar panels.

Evergen Systems Ltd are authorised and regulated by the Financial Conduct Authority FRN 783496. We act as a credit broker not a lender and offer finance from a panel of lenders. You may check this on the Financial Services Register by visiting the FCA website. Evergen is registered in England and Wales (Company No. 07622119). Registered office: 178 Buckingham Avenue, Slough, Berkshire, England, SL1 4RD, United Kingdom. Evergen Systems Ltd. All Rights Reserved.

We use cookies to give you the best experience on our website and to make sure the ads you see on other sites are relevant. By continuing, you agree to our use of cookies. Find out more here.
Accept
Manage consent

This website uses cookies to improve your experience while you navigate through the website. Out of these, the cookies that are categorized as necessary are stored on your browser as they are essential for the working of basic functionalities of the website. We also use third-party cookies that help us analyze and understand how you use this website. These cookies will be stored in your browser only with your consent. You also have the option to opt-out of these cookies. But opting out of some of these cookies may affect your browsing experience.
Necessary Always Enabled
Necessary cookies are absolutely essential for the website to function properly. These cookies ensure basic functionalities and security features of the website, anonymously.
Functional
Functional cookies help to perform certain functionalities like sharing the content of the website on social media platforms, collect feedbacks, and other third-party features.
Performance
Performance cookies are used to understand and analyze the key performance indexes of the website which helps in delivering a better user experience for the visitors.
Analytics
Analytical cookies are used to understand how visitors interact with the website. These cookies help provide information on metrics the number of visitors, bounce rate, traffic source, etc.
Advertisement
Advertisement cookies are used to provide visitors with relevant ads and marketing campaigns. These cookies track visitors across websites and collect information to provide customized ads.
Others
Other uncategorized cookies are those that are being analyzed and have not been classified into a category as yet.
SAVE & ACCEPT
Powered by